One of my daughter Roro's more enjoyable homework assignments is to attend a symphony each school term. I often get to attend with her and since I love the symphony anyway, it's a great night out. She's required to turn in a short report of the concert for her grade, but even though I usually buy the tickets, I never get a grade. So I decided to write this report a couple years ago and I turned it in to  her teacher. I still didn't get a grade, but I'm pretty sure it was well received.

I attended a concert of the American West Symphony on October 11, 2013 at the Assembly Hall on Temple Square. When we arrived, the music had already started and I thought I was really in for a long evening because the performance didn't seem up to professional standards. In fact, I thought the musicians were each playing a different song. Then I realized they were still warming up. Soon, the first chair violinist stood up to get everyone's attention and make them stop goofing round. Then the oboist played a long A, which is one of my favorite notes. It must take a lot of practice for oboists to hold their breath that long. The rest of the orchestra joined in with their own A's and not long after that, the concert began. 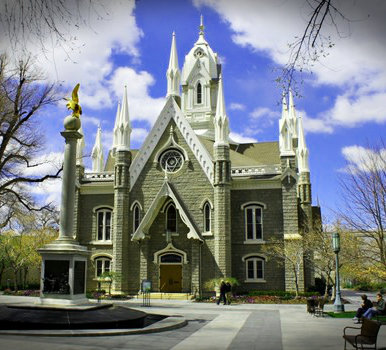 The conductor, Joel Rosenberg, did a great job keeping all the musicians on task even though he wasn't wearing one of those tuxedos with long coat tails. At first, I had trouble taking him seriously because he bears a strong resemblance to Jerry Seinfeld's Uncle Leo. Then I remembered Uncle Leo had already died, so it couldn't have been him and I was better able to pay attention to the music. Mr. Rosenberg gave interesting background before each piece, which I really enjoyed. For example, he described how Hector Berlioz once dressed up as a woman, got some guns, and planned to murder his ex-fiancee, ex-fiancee's new suitor, and ex-future-mother-in-law. Thankfully, Berlioz didn't go through with it, or we wouldn't have been able to enjoy the Roman Carnival Overture, op. 9. This overture was a fun piece—not bad for a cross-dressing murderer wannabe—and really did have a carnival-like quality. It would be good background music to a Bugs Bunny cartoon. ("Kill the wabbit, kill the WAbbit . . .")

The Assembly Hall has interesting acoustics that made it sound like the horns were coming from the left side, even though they were on the right. Some of the music actually sounded like it was coming from behind us, which would have been difficult since we were in the back of the rear balcony. Maybe the acoustics were to blame for the violins sounding slightly out of tune during Franz Schubert's Overture to Rosamunde. Or perhaps it was because more people were sitting on the left side of the hall than the right which put everything out of balance. In any case, I still enjoyed Schubert's piece. I always thought he was a more relaxed piano playing type of composer. But this piece was actually pretty rockin' and kept me from getting too relaxed. Of course the relaxation issue might be due to the fact that the benches in the hall were designed for hobbits, or perhaps orangutans.

The musicians were all very well dressed and I have to compliment the tuba and the triangle players for remaining so patient while waiting their turn to perform. The third chair violinist was especially animated throughout the performance. Even when he only had one note to play, I thought he was going to fall off his chair. Fortunately, the chair survived, and he managed to avoid poking out the eye of the violist sitting next to him. The principal percussionist had several sets of drumsticks that all looked the same to me, but apparently they each had a separate purpose because he kept swapping them. He also had an awesome ponytail that complimented his high forehead and made it appear like his hair had all slipped backwards.

One of the more mesmerizing parts of the performance occurred when a large moth began flying around the hall. At times it seemed to be dancing to the beat of the music. I got real nervous when it flew dangerously close to the cymbals during Tchaikovsky's "Little Russian" Symphony no. 2 in C Minor, op. 17. At that point, all three percussionists AND the tuba player were going full speed. But despite all that racket, an older lady on the third row of the balcony still managed to fall asleep. I think if Tchaikovsky were still around today he'd be quite old, but more importantly he'd probably compose music similar to the progressive rock group Dream Theater: very technical and difficult to perform, but with lots of noises throughout each piece to keep listeners on their toes.