A few years ago, I went out to run errands on a cold, dreary Valentine’s day. It had snowed during the night, but not pretty, fluffy mid-winter snow. February snow is always wet and slushy. The clouds hanging low over the city still tried to drop more snow, but the air had warmed just enough to turn it all into sticky sleet that splattered on my window, and piles of dirty slush on the ground turned the world into grey boredom. 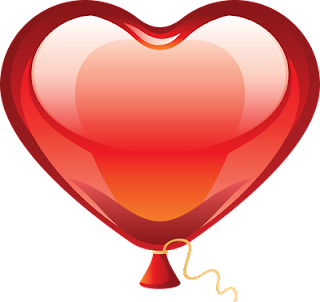 I stopped at a small intersection to wait for the light to change, and noticed the only item of color in the whole town—a red, mylar balloon that escaped from someone’s bouquet. It had once been shaped like a heart, but the cold had shrunk the helium and turned it into a shriveled, dying lump of coal. It floated just above the road, where it trudged sadly across the slush. I watched it struggle through the intersection until a tall black truck came by and drenched it with salty sludge.

The balloon sunk down onto the road, buried and defeated. But it refused to give up. It rose back out of the sloppy snow and continued trying to float until it stopped next to my car. This balloon had spunk. It wouldn't let the dirty world crush its spirit.

So I opened my door, stepped out into the drippy weather and saved the balloon from further humiliation. I took it home, washed off the salt and black water, and waited. As the helium warmed, the wilted balloon expanded back into a full heart, and rose off the bathroom counter up to the ceiling. It had resurrected! I felt so proud of that balloon.

Then I remembered it was Valentine’s day and I still hadn’t found a gift for my wife. So I went into our room and presented Stephanie with the greatest gift ever—a Rescue Balloon. I told her its story and she accepted it gratefully, mostly because I hadn’t wasted any money on a fancy purebred from the designer balloon store.
Posted by Lon Dee at 8:14 AM 0 comments