A number of years ago, we traveled as a family to visit my in-laws in Taiwan. While there, my younger daughter Roro had a loose tooth fall out. She immediately got justifiably worried because she didn’t think the tooth fairy would visit her in Taiwan. We explained how the tooth fairy visits ALL children, but that led to a big discussion because her cousins hadn’t received visits from the tooth fairy before, and in fact had never even heard of the tooth fairy—we had to explain the whole concept to them.

Roro got even more worried. She didn’t think Taiwan had a tooth fairy and even if she was there, she probably wasn’t very good because nobody knew about her.

Then a dental miracle happened.

It seems that Roro’s aunts were also worried the tooth fairy wouldn’t arrive, so they decided to help out. Without telling anyone else—including each other—they each crept into the room and added a little of their own money under the pillow. This went on all night, with people sneaking into the room and adding to the pile.

The next morning, as we all sat in the living room talking, we heard some very excited sounds coming from Roro’s room. She came running out with a big wad of cash in her hands.

With a huge smile on her face, she proclaimed, “The Taiwan tooth fairy is WAY better than the American tooth fairy!”
Posted by Lon Dee at 6:44 PM 0 comments

A Song of Hope

I was recently in the gym talking, coincidentally, to a guy named Jim, and the Styx song Come Sail Away played on the radio. Thinking about that song, it certainly hasn’t been a great, influential part of my life that inspired or comforted me, or even has great sentimental value. But as I told my friend Jim, it’s interesting how my mode of listening to that song has changed over the years.

I first heard Come Sail Away in elementary school on the little AM transistor radio I used to hang on my wrist. I liked the song because it mentioned starships, and I was really into anything that had anything to do with space. I was so cool because I knew lyrics to a pop song.

But that was just the beginning.

Not long after that, I recall going to a friend’s house and listening to Come Sail Away on his dad’s old 8-track tape player. Actually it wasn’t old at the time, and it was really awesome how some songs would suddenly fade out half-way through the music, then fade back in when it switched tracks. It was state of the art. 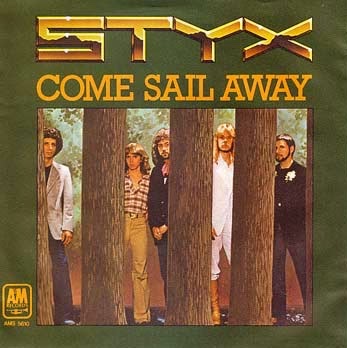 Or so I thought.

When I reached junior high school age, another friend had the song on a 45 record, which we listened to often. The good thing about records was how they’d get damaged, then skip and keep playing the same part of the song over and over. Few kids were as hip as us.

But things got even hipper.

In high school, I attended an outing with a youth group where we took a bus to another city. Someone on the bus had the whole Styx Grand Illusion album on a cassette tape and played it repeatedly on his boom box while we all sang along. We had to wait after each playing as he rewound the tape, which was a good thing because it allowed us to catch our breath.

Then I took a breather from the song for a while.

Come Sail Away sort of faded out of my life for about ten years until I bought it on CD as a Christmas present for my oldest daughter. I was happy that she liked a song that I liked when I was young. We’d listen to it together and we’d finally reached the epitome of the digital age.

But I was wrong.

Several more years passed and my two older kids, who’d grown into teenagers themselves by then, joined a youth group outing just like the one I’d done so many years earlier. This time I was the driver in our 8-passenger Land Cruiser. My son pulled out his iPod Shuffle and we plugged it into the stereo via the cassette tape adapter. And once again, all eight passengers—two generations—sang along to the same old song. Come Sail Away had sailed full circle.

But there was still wind in its sails.

As I sit here and write this, Come Sail Away is playing on the same stereo that we used to listen to the CD when my daughter was younger. But this time, my phone is streaming the song from Spotify and it’s connected to the stereo via wi-fi. And my kids—the older and the younger ones— are singing along.

So where do we sail from here?

I’m hoping we can stream music directly into our brain from a satellite. Then we can just think of a song and it’ll play.

Perhaps this “song of hope” does have great sentimental value after all, as I think of childhood friends and the dreams we had.

Come Sail Away on iTunes
Posted by Lon Dee at 7:37 PM 0 comments

It’s been a while since I posted here, so I thought I’d re-start with a very intellectually stimulating story. A number of years ago, I participated in a humanitarian trip to a small village in eastern Indonesia. Our group of about twenty included retirees, teens, and many in between. We busied ourselves during the day helping install a clean water system for the villagers. In the evenings, we relaxed, spent time with the locals, and shared in each others cultures. Looking back at this experience, it was really a highlight in my adult life, especially the story I’m about to relate.

With no electricity in the village except for a small generator, the community center had the only lights, so we’d often gather there after dinner. One evening, I joined a couple high school kids from our group and we sat on a fence near the community center with several twenty-something men from the village. The villagers didn’t speak English and we didn’t speak Indonesian, but we had fun trying to hit things with rocks, attempting to stand on the fence posts with one leg, and other guy things.

Meanwhile, two high school girls from our group, who happened to be sisters, stood on the outside steps of the community center trying to teach a group of villagers an English song. They’d chosen the classic If You’re Happy and You Know It. I’m sure you’ve heard this one: If you’re happy and you know it, clap your hands (everyone claps), etc. They struggled getting the point of the song across, since nobody spoke English, but the villagers all readily joined in clapping their hands, stomping their feet, flapping their arms, and other entertaining actions.

Those of us on the fence watched this after having eaten a large dinner that included some spicy beans. At one point, one of the kids with us accidentally made a rather embarrassing bean-related sound.

We all looked at him and his response was something like, “Was that out loud?”

One of the villagers who knew a couple English words, laughed and said, “Katoot. That’s katoot.”

We suddenly realized we had inadvertently learned a very useful Indonesian word. And it was way better than the English word for the same thing.

While this was going on, the sisters on the steps arrived at the verse, “If you’re happy and you know it, show a smile.” But the villagers couldn’t quite get the smile concept, despite the girls pushing the sides of their mouths up until they looked like The Joker.

One of the girls finally turned to us and asked, “Does anyone know the Indonesian word for smile?”

She thanked him and continued with the song. “If you’re happy and you know it, katoot!”

Of course everyone instantly smiled, so she and her sister assumed it was correct and started dancing while proudly telling everyone to katoot. Soon the whole village was laughing and the girl finally realized something was wrong.

She turned back to us. “Hey, what does that really mean?”

By that point, we’d fallen off the fence, unable to respond.
Posted by Lon Dee at 3:14 PM 0 comments