I spent a lot of time in my high school years playing jokes on people, and sometimes people got me back. One of those paybacks happened late on a Saturday night, long after I was in bed. My mom woke me up Sunday morning and said I needed to go out and do something about my car. It was an old, green 1973 Chevy Impala that broke down a lot. I wasn't sure what mom was talking about and figured something must have fallen off of it again.

I rubbed my eyes and looked out the window. It had snowed a thick layer during the night, but only on my car. What was it? Mom gave me her "I don't know what kind of friends you hang out with" look. I threw on a shirt and went outside to investigate.

The Impala was parked out in the street. I approached it and quickly found out what had happened—it was covered with a fluffy carpeting of feminine hygiene products.

I stood there assessing the damage. Then I heard some honking. Our street happened to be the connecting road between two parts of the neighborhood, and everyone was on their way to the local church—while I was standing there, barefoot and wearing pajamas, staring at a pad-covered car. You know what the conversation at church was about that week.

It took a while to get them off the car. Some of the adhesive never came off. But it didn't take long to find out who'd done it. It seems these were a new brand of pads that the manufacturer had sent out to mailboxes all over the county as free samples. (Can you imagine some old widower living alone and opening his mailbox—"What the crap is this?") The post office ended up with many cases left over and didn't know what to do with them. They decided to give them to the nearby Girls Village, which was a group home for girls with family issues.

A whole building filled with girls our age was a strong temptation for me and my friends, so we hung out there a lot. And we played practical jokes there a lot. And they finally got me back.

Later, we stole some of the pads from their shed—yes, they had a whole shed full—and padded other cars. It kept us entertained for a while.
Posted by Lon Dee at 7:44 AM 0 comments

Pets are an interesting concept. The idea of owning another living being for your own enjoyment is a little strange, especially when you keep that being in a cage. But pets can be entertaining and provide some friendship. And I suppose that friendship often goes both ways.

Pets aren't always treated well, though. If there's a pet afterlife where we'll meet our former animals after we die, then I'm probably going to be facing a herd of emaciated hamsters ("Couldn't you have given me just one more carrot?") and confused fish ("Why did you flush me?"). 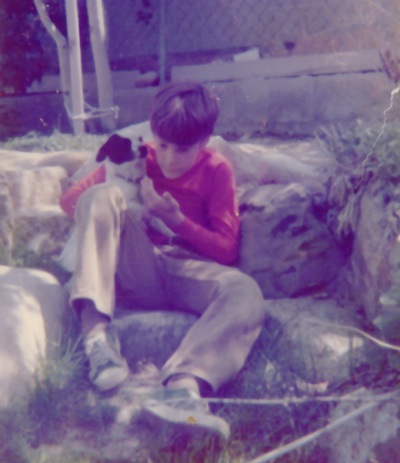 When I was young, I had a dog named Snoopy. I wasn't too creative in coming up with names. He was a small shorthaired mutt, the kind my friend calls a Neighborhood Special. We kept him outside, but probably shouldn’t have because he was really too small and furless for our harsh winters.

He managed to survive each cold season and was always happy to see me every morning when I'd scrape the ice out of his water bowl and dump a shapeless blob into his food bowl.

One winter afternoon, I wanted to play in the snow but couldn't find anyone to join me. It was a cold, gray, dreary day, and nobody else wanted to go outside. So I suited up and went out by myself and found Snoopy waiting there. He'd been alone all day and jumped all over me. He wagged and snorted—I think that's how dogs laugh. He followed me around while I tried to roll out a snowman. It hadn't snowed in several days and the crusty snow wasn't sticking, so I soon gave up that pursuit.

I tried making little roads in the snow for pretend cars to drive in. The grass under the snow had piles of smelly, decomposing leaves leftover from autumn, so that wasn't fun either. Snoopy enjoyed the smells though. The driveway had been cleared, so there was no ice to slide on. I tried playing tetherball, but the rock-hard ball hurt my hands. I soon realized why nobody else had wanted to go out.

I finally gave up and just sat on the snow under the plum tree. Snoopy jumped onto my lap. I tried calming him down, but his tail just wouldn't stop wiggling. He eventually curled up and I petted him while my butt froze. As he lay there, he kept raising his head to look at me, as though trying to tell me something, or perhaps thank me for spending time with him. Soon my dad came home from work, and I went inside for dinner. I left Snoopy by himself in the cold, dark yard.

After a freezing night spent in his little wooden house, Snoopy was there again in the morning, wagging and snorting like always.

A year or so later, on a warm, spring Saturday morning, I left Snoopy in the yard while I went to get a friend. Snoopy really wanted to follow me, but I closed the gate and made him stay. When my friend and I returned we discovered Snoopy under the fence. He'd tried following me by pushing his way through. His collar had caught on the fence and in his efforts, he'd choked himself.

He died trying to be with me.

I recently saw a bumper sticker that read, "I want to be the person my dog thinks I am." I don't know who wrote that, but if we all had the same goal, I think the world would be a lot better place.

While my high school friends and I often participated in silly shenanigans, we usually didn't purposely try to be mean to people. One time, however, my friend Stitch and I decided we needed to egg someone's house. To this day, I can't understand why we felt that need, or why we picked this particular person. I can't recall our target's name, but I do remember he was a nice kid who never did anything to us. But in our minds, he needed an egging.

And once a teenager gets something in his mind, it's hard to replace it with something else.

We planned our caper at Stitch's house. I distracted his mom in the kitchen while he stole two eggs from the fridge. It wasn't easy, because his mom had a sense of knowing when we were about to try something. We managed to get the eggs and then drove my old 1971 Ford Country Squire station wagon over to the target house.

Let me preface this next part by saying I'm not sure I truly believe in karma. But I do believe that all of us, sooner or later, always get what we deserve.

This was to be a drive-by egging, so I inched the Country Squire past the target house. It was late afternoon, there were people all over, and we worried who might see us. But we egged each other on—ha!—and were determined to go through with it. I think we had eggs on our brains. Stitch sat up on the open window sill and tossed his egg over the car. It soared in a beautiful arc across the yard and … it landed on the lawn and bounced. Then rolled to a stop by the doorstep. Stitch's mom must have known what we were up to and hard-boiled the egg.

I knew I could do way better than that. I brought my left hand back across my chest. I threw with all my might out the driver's window. But the egg never made it. Instead, my hand slammed against the front pillar of the car. I nearly broke my fingers. Egg splattered everywhere, especially down the defrost vents.

Karma had struck quickly that day.

It took at least a full hour for the two of us to restore our proper breathing. We laughed so hard we needed oxygen. And the Country Squire never smelled the same after that.
Posted by Lon Dee at 9:26 AM 3 comments

When parents ask a teenager "What were you thinking?" and the teen responds "I don't know," the parents need to realize that the teen truly doesn't know. Like the time my older son jumped out his friend's moving Suburban. Did he really think he could accelerate his legs from a complete stop to twenty-five miles an hour before he hit the asphalt?

When my friend Brent and I were fifteen and moving on to high school, we received invitations to Meet Your School night a few weeks before classes began. Moving from junior high to high school was a big step, and we didn't want to be complete dorks by not attending Meet Your School. Besides, my older sister was a school officer and promised me it would be cool, so I took her word for it. We even got there ten minutes early. And we quickly discovered that only dorks got there early. In fact, I think only dorks attended at all.

We worried we wouldn't find a seat and hurried into the auditorium. Only one other person was there—an older guy, probably some other dork's dad. We sat about five rows behind him and waited for the excitement to begin.

Brent had a touch of hay fever that day, and while we sat there, he coughed and produced a giant loogie. Teenagers are fascinated with body fluids—pus is always a favorite—and not wanting to swallow it back down, Brent expelled it onto his hand. And it was a magnificent specimen.

The next question was, what could he do with it? A fifteen-year-old boy in that situation doesn't have a whole lot of options. Walking to the restroom to wash his hand was certainly not one of them. He chose the only other option—tossing the loogie out into the air. I mean, what else could he do?

The loogie whirled through the dark auditorium like a spiral galaxy spinning through outer space. It arced downward and straight toward the one place we wished it hadn't gone—right down the neck of The Dad sitting in front of us. It was a perfect shot. A hole in one. But there was no time for congratulations. Brent and I froze into perfect granite statues.

The Dad winced. He reached back into his collar. He pulled his hand out slowly. Slime dripped from his fingers. He turned around. He stared back at us.

If you took the entire energy output of the Three Gorges Dam Hydroelectric Generators, it wouldn't even come close to the amount of energy Brent and I expended for those eight seconds trying to maintain composure while The Dad's eyes bored into us. Maybe he'd think it was someone else. Of course we'd forgotten we were the only other dorks in the whole room.

We fully expected a beating, but The Dad just slowly stood up, continued glaring at us, and walked out of the room. He came back after a few minutes and sat somewhere else. I'm not sure what prompted him to be so forgiving. Maybe he'd tossed a loogie when he was fifteen.
Posted by Lon Dee at 7:47 AM 0 comments