All I Need is a Hairless Horse

It's been a while since my last post. I've finished my books and they'll be released within days, so I'll be posting more regularly now.

One of my books, The Power of Powers, has a character named Sparrow who has an unspecified disability. If you know anyone with Down Syndrome, you'll easily recognize that this is what I was trying to portray. I patterned much of Sparrow's behavior and speech after my son, Tian Tian, who also has Down Syndrome. My purpose in doing this wasn't to preach anything or try to spotlight Down Syndrome. I just wanted to tell a story and happened to include a character with these traits. Also, though, I guess I wanted to show that in many respects, people with disabilities aren't really that different—everyone just wants a peaceful and fulfilling life.

Tian Tian does have some traits that are different from others. One thing that stands out is his desire for simplicity. We've given him some cool—and expensive—toys before, only to have the toys ignored while he plays with more simple items. Rather than ask for a fancy helmet to play a knight, he'll just put a plastic mixing bowl on his head. He has some ornate toy swords, but prefers to use our Vitamix juicer plunger. The plunger also doubles as a gun, an airplane, a bird, or whatever else he needs it to be. 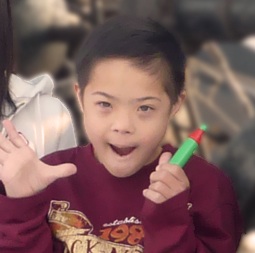 Another toy that was his favorite for years was a green plastic doctor's thermometer from a toy doctor kit. The first phrase Tian Tian learned to say was "green toy," and he took that toy with him everywhere. He lost it many times and always found it again, until it fell down a storm drain one day. If anyone can tell me where to find one just like the one in this photo, Tian Tian will be eternally grateful!

Something he's played with for many years is a small plastic horse. At one time, it had velvety fur and a soft mane, which all rubbed off long ago. Now it's just a rather homely, hairless, brown piece of plastic. But in Tian Tian's eyes, this horse is as magnificent as Spirit, Stallion of the Cimarron.

I wish my needs were so simple.
Posted by Lon Dee at 7:14 PM 0 comments