When I was younger, I had the opportunity to serve as a voluntary missionary for the church I attend. I was assigned to serve in the country of Taiwan and learn Mandarin. That type of service always brings with it great, life-changing experiences. But it can also lead to some very unusual episodes, especially when living and serving in another country and culture.

As missionaries, we were assigned a companion and expected to work full time helping others, and hopefully, to even convert a few people along the way. One day, my companion Elder Leach and I rode our bicycles through a rural area in the outskirts of Taipei. We came across a dome-shaped building that looked like an athletic arena, but much smaller. It seemed very out of place, given the distance from any major population center. A busy herd of cargo trucks backed up to the building, unloaded their cargo, loaded new cargo, then drove away. 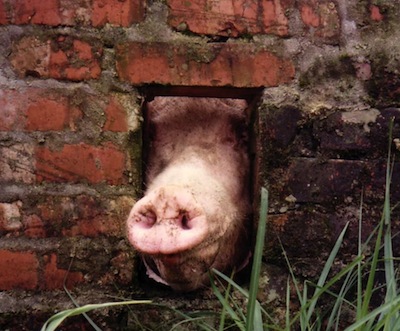 Curious about the happenings, we parked our bikes and wandered up between the trucks. We soon found out that the cargo was live pigs. The smell gave it away. Men wearing hip-length boots and wielding electric prods forced frightened, squealing pigs off the trucks. The pigs scurried through the building in maze-like chutes separated by low walls. The men walked along these walls and directed the pigs to a door in a big wall that hid the front half of the building. After a moment, the pigs would reappear through another door in the big wall, where a code was painted on their hides. The men then routed the terrified animals through more chutes and loaded them onto different trucks.

We'd never seen anything like this, so of course we decided to climb onto one of the walls and wander through the maze to investigate. Keep in mind, we were wearing white shirts and ties, with dress pants and shoes. And we were the only Caucasians in the whole crowd.

It was fascinating how efficiently the men shepherded the pigs to their appropriate chutes. The snorting pigs, the buzzing shockers, and the thick odor made for quite a multi-sensual experience. We slowly made our way to the front of the maze, all the while dodging the men with their electric prods. Some of the men seemed annoyed by our presence, but most ignored us as the pigs kept them busy.

When we reached the big wall where the pigs kept disappearing, we still hadn't figured out what was going on. We noticed a door near the walkway and decided to explore some more.

Elder Leach opened the door just as I lost my balance. I bumped into him and we fell through the doorway and down onto a big stage surrounded by a few hundred people sitting in an auditorium. Everyone in the room stared at us. Did I happen to mention we were the only white guys, and the only in dress clothing, and the only twenty-year-olds surrounded by older men?

We quickly realized what was happening—we were on center stage of a pig auction. The pigs arrived through a door on one side and paused while people in the chairs placed bids with electric panels. Once a price was set, the pigs scurried out the other door. It was just like a fashion show in New York or Paris, except that . . . well, maybe that's not a good analogy.

We also quickly realized we had stepped into something we shouldn't have—and had the dirty shoes to prove it. We turned to climb back up through the door. Unfortunately, it only opened from the outside; there wasn't a handle on the inside. And on the front of the stage, the pig chute surrounded us. We were trapped.

You may notice a theme in my blog postings. When confronted with a choice, the main participants in a given event don't always choose wisely. And once again, in this instance, we proved that to be true. Feeling we had no other choice, we pulled out little notebooks and pens, and wandered around the stage, taking notes of everything we saw. When a pig squealed loudly, we immediately shook our heads with grave expressions and wrote it down. When the auctioneer glared at us, we again shook our heads and wrote it down. When a pig tried escaping by climbing onto the back of another, we ran over to the brave animal and wrote down its name.

The auctioneer couldn't stop the proceedings because the men in back didn't know we had interrupted things, and kept sending more pigs through the chute. And short of climbing into the pig chute ourselves, there was no way for us to get off the stage. So while the auctioneer continued his job, we continued ours by making notes of the smells, the bidders, the shape of each pig's snout, and other important things.

Finally, a man in the audience climbed a short ladder, lowered a platform over the pig chute, and joined us on the stage. He politely asked if he could help us with anything.

We looked at each other, then at him. Elder Leach explained, "We're missionaries. Do you want a pamphlet?"

He didn't. But he did help us off the stage. The auction continued and we left, having not converted a single person in the whole auditorium.
Posted by Lon Dee at 10:06 AM 1 comments