Invisible for a Day

I think many people re-define themselves at various times in their lives. Sometimes it's deliberate and sudden—you show up at school with newly spiked hair and a bunch of head banger music in your iPod. Other times I think it just happens over time—a mean bully that slowly realizes his victims are actual human beings and not punching bags.

When I was in high school, I decided to change everything about me, including my name, for one day. I became a nerd, or what I thought was a nerd. Back then, nerds weren't cool like they are now, and I wanted to be the most un-cool person in the school. Of course, I wasn't very cool to begin with, so it wasn't that hard.

I found some old clothes, most of which were too big for me, and a pair of my dad's old horn-rim glasses (which were very much NOT in style then). I put some tape on the glasses for good measure. I carried a dictionary around with me. You remember dictionaries, don't you—those thick books with words in them? I also carted a record album called Beginning Square Dance, along with all my text books, which I normally left in my locker. I had a whole fistful of pens in my pocket, a dorky ball cap, and a Snoopy lunch box.

I was as nerdy as I could be. And I became Fenster McNabb. 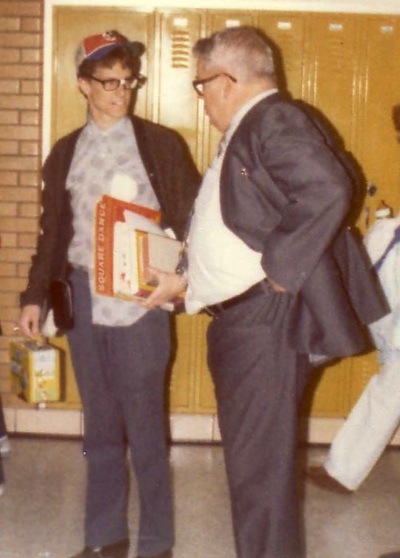 When I got to school, I purposely avoided people. I stared at the floor and slinked along the edges of the hallways. A few teachers recognized me and got a good laugh out of it. But several times, I walked into class and the teacher politely asked if I was a recent move-in, usually in a "I don't want to frighten you" voice. The other kids found that pretty funny.

The principal stopped me when I was late to one class. I think he was a little confused about whether I was for real or not. My friend Stitch got a great picture of the encounter.

It was interesting because most people really didn't know who I was that day. I had a couple rude or teasing comments directed my way, but I found that few people purposely picked on me. Rather, I was just ignored. It kind of made me wonder what it felt like for kids who were ignored every day.

I don't know that I came away from that experience with any great revelation. I just did it all on a lark. But thinking about it now, I realize there are a lot of invisible people in the world—people who are invisible even though we see them every day.
Posted by Lon Dee at 7:53 AM