As I've gotten older, I've reflected on my life and come to a conclusion: I'm pretty sure I have a social disability. I often have difficulty relating to people in a normal way. I usually end up resorting to humor or just acting goofy. When I was in high school, I found a way to temporarily overcome this problem—instead of interacting with real people, I created fake ones.

One day I decided we needed a scarecrow in our vegetable garden, so I went to the thrift store to find some old clothes. After bringing home a flannel shirt and a pair of overalls, I stuffed it all with newspaper and sewed it together. I attached some old socks and shoes and used a halloween mask on a wig stand for the head.

When finished, I looked at my creation and realized she (she'd already taken on a persona by then) looked way too nice to just stick in the garden. So I did the only thing I could do at a time like that—I gave her a name, Ethel McCleaver, then sat her in the passenger seat of my car and drove around while talking to her. 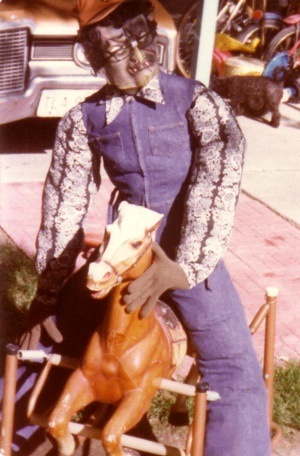 I had a lot of fun with Ethel, especially at traffic lights and drive-throughs. Since my old car had a bench seat, I sometimes strapped her into the driver's seat while I sat in the passenger seat and drove with my left foot and arm stretched across the car. When I was too nervous to ask a girl out to a dance once, I put Ethel and a hidden walkie-talkie on the porch so she could do the asking. Then, after I got turned down, I took Ethel to the dance instead.

One day, the front wheel of my car fell off and I was stranded in the middle of a busy road. Nobody stopped to help until I hung Ethel out of the door like she'd passed out. A police officer (the third to pass by) immediately stopped—but it was to offer some choice words rather than to assist. At least the tow truck driver found it funny.

After a while, I realized Ethel was probably lonely when she sat in my car by herself all the time. So I made three friends for her and named them all. We had a great time all summer long, attending fireworks shows and parades, but it almost came to a tragic end when they nearly got shot.

It happened like this. I picked up several human friends for a night of gallivanting and didn't have room in my old Impala for everyone. So I folded my thrift store friends in half and sat them down side-by-side in the trunk. I had to squeeze the trunk lid down tightly to get it to shut.

As we were traveling around, I happened to pull onto a road and swerved a little—right in front of a city cop, unfortunately. He pulled me over in the 7-11 parking lot to see if we'd been drinking. After looking at each of us closely and inspecting the car, he still wasn't convinced we weren't drunk and asked to look in the trunk. I suggested that wasn't a good idea, which only made him more curious. So I handed him my keys and he walked over to open it.

With the pressure of four newspaper-stuffed friends in there, the lid popped open quickly. Ethel and her buddies instantly sat upright with their arms flapping, and two of their heads fell off.

The cop jumped backward and grabbed for his gun. My friends and I fell onto the pavement, laughing so hard we shot Slurpees out our noses and couldn't breathe. Once the cop caught his breath, it was all he could do to keep from laughing and remain professional. He decided we weren't drunk, so he let us go, and we bought new Slurpees and continued our gallivanting.

I eventually dismantled all my friends when my parents got tired of me storing them in the family room. And I guess I can say that spending a summer hanging out with a bunch of dummies probably did help prepare me in some small way for the rest of my life.
Posted by Lon Dee at 2:58 PM