Our family recently went looking for a well-known taco cart in Salt Lake City. Apparently the taco guy took a personal day, so we ended up at a food court downtown. It happened to be in a mall that's seen better days and is hard at work on its renaissance—but it's not quite there yet.

I've never really enjoyed American food court food, though an occasional gem can be found if one looks hard. And this particular food court is pretty bad. There are few food choices, the acoustics make it horribly noisy, and much of what we finally ordered that day turned out sub-par—except McDonald's and Subway, which basically tastes the same anywhere you go. I think the shrimp in my crispy sushi rolls were dredged out of the Great Salt Lake. The taste was reminiscent of the way our car smelled one time after we accidentally left a raw pot roast in it when parked in hundred-degree heat—for three days.

The day after our food court experience, Stephanie and I flew to Taiwan, though it wasn't because of the food court—or the recent election results. It was actually a planned trip to visit family. So here we are in Taipei, surrounded by wonderful-smelling food everywhere we go. It's like the entire city is a food court. Except this food is mostly good.

We ran into a problem on our first day here, though, because we couldn't eat any of it—and it was by choice. We had a particular need to skip a few meals that day, and we soon discovered that you should NEVER walk around Taipei while fasting. The temptations are just too great. We basically lost all willpower. I'm happy (I guess) to say that we made it—we didn't eat until we got home that evening and had yummy homemade mother-in-law food.

I'm an inconsistent vegetarian and prefer spicy ethnic cuisine, or basically not the American food I grew up with. Stephanie is an omnivore that prefers the tastes of her East Asian homeland. So when in Utah, we often drive all over looking for something we both want to eat, then end up just going home and heating up leftovers. But here in cosmopolitan Taipei, we can both find anything we want.

It was worth skipping a couple meals—and flying thousands of miles—to get all of this. 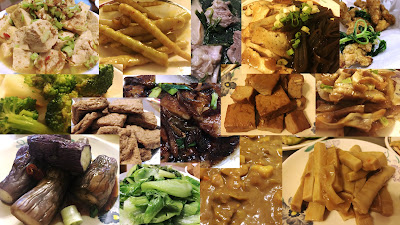