I used to work in a small office setting with only a few other employees. Outside our office, at the end of a long, dark hall, sat an old vending machine. It was notorious for taking our money without delivering the goods. It worked about half the time and stole our money the rest. But whenever we were hungry, we'd crawl timidly down the hallway, pay our dues—seventy-five cents for a fruit pie—and had faith that the desired treat would appear. More often than not, our faith was shaken. 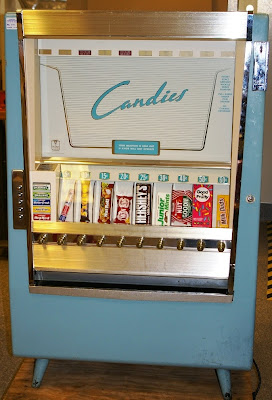 One day we discovered that if you put money in it, you'd get nothing back, which was not surprising. But if you just pulled the knob without any money, the treat magically arrived in the bin. It was busted—in the best possible way! As soon as word of this great windfall got out, vengeance day arrived. We stopped all our work and gathered around the machine, swiping all the candy we could. It was payback time at the office.

For better or worse, our consciences soon started feeling bad. Inexplicably, so did our stomachs. We'd already stolen and eaten about half the chocolate bars, fruit pies, Twinkies, and other equally nutritious trash, but maybe it was time to let the owner know about his broken machine. One of us finally called the service number posted near the change slot and reported what was happening.

The vending guy showed up very quickly. He repaired it then stopped in our office to thank us for acting as such outstanding citizens by reporting it. He was a small business and his only source of income was these vending machines he'd set up in offices. We nervously glanced at each other. He only made a few pennies on each sale and even the loss of one piece of candy took many more sales to make up for. All the stolen swag in our stomachs began churning in an odd way. He and his wife spent each day driving around the valley to check on machines and it wasn't an easy way to make a living. I waited for him to tell us about his disabled child and dying mother next.

We kept looking at the floor and rubbing our necks and wishing he'd stop making us feel like The Great Satan. Finally, he pulled out some candy and set it on the table for us.

"Thanks for being such honest people and reporting this to me," he said, then turned and left. As I recall, that candy remained on the table a long time before someone finally ate it.
Posted by Lon Dee at 7:34 PM